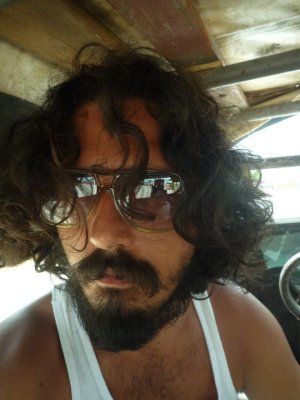 I met Madrid-based painter, Marc Janus, while travelling in Panama. Marc is the kind of person that inspires you to want to make yourself more interesting and to interact with people in a different way – like he does.

Where was the first place you travelled? How old were you?
When I was 18, I travelled to Paris. I thought it was incredible. I liked the architecture so much that I think that was one of the first times I really thought I wanted to be an artist.

What is it about travel that makes it important to you?
For me, the most important part of travelling is the people; having the opportunity to meet different people from different cultures and just talking to them, empathizing with them, talking about my life and listening about their lives. I can listen for hours to those sort of things. In those interactions I feel like I start to connect to people in a different way, not just superficially.

Tell us about your artwork…
My work over the past few years is an investigation that began after my travels to Asia in 2008 when I discovered some antique decorative blocks originally used in Nepal, Pakistan and India as stamps to decorate fabrics. I use the blocks which contain floral and geometric forms to create decorative elements on my paintings. I soak them in paint and I stamp them on the canvas.

Most of the phrases come from interactions that I have with people, proverbs that I have heard, or things I see written on street signs, shop windows, etc. My work is profoundly influenced by my travels around the world and the experiences I have with the people and cultures. When I paint, I explore these ephemeral, transformative, and emotionally charged moments. I think about them as points of contact-whether this contact entails dialog, tension, or both-and I translate them into relationships of colors, words, shapes, strokes, and shades. Because my work is the result of personal encounters with people across borders and nations, I believe that creativity is a phenomenon deeply routed in social interactions. In order to reflect these complex cultural contacts, I draw on a variety of sources.

MarcJanusDamned Words.2012 130x130cm.Oil on plasticcanvasI often take images found in Classical art forms of different cultures and give them a contemporary twist. I combine decorative and figurative motifs. Other times I juxtapose on my canvas words and matter to explore the relationships between order and chaos, impulse and rationality, nature and imagination. The interaction of these elements allows me to reflect a process of transformation more than fixed meanings. In my work, I am not interested in expressing concepts, but capturing the complexity of the moment before a concept is born.

Is there a country, city, or person that has inspired you most?
More than just a country, I found special pleasure in traveling in Asia. One city that really impacted me is Varanasi, India. I went to Varanasi in 2008, I don’t know if it has changed much since then… What struck me was the fact that it was the first city I’ve ever seen in which people begged not for living but for their death. Everyone wanted to be incinerated in Varanasi and have their ashes go to the Ganges, the sacred river. So people beg to pay for the fuel to incinerate their bodies. There are hundreds of funerary pyres everyday, all the time. And the city has these stairs called ghats that go down to the river and where people clean themselves, and bath their children, and wash their clothes.

You see people carrying the dead bodies to the river, they put the body in the water for a few seconds and the depth at which they sink it depends on the dead person’s caste. They introduce a stone in the corpse’s mouth and lay the body on the pyre. So people beg for the fuel, and if they are poor or don’t get enough money to be burnt with wood they are burnt with gas, which is apparently frowned upon. After the body burns for a couple of hours someone breaks the skull to set the soul free and then let it burn a while more. What usually happens is that the bones of the pelvis and thorax are too thick to burn completely, so they remain after the rest is gone and they’re thrown into the river.

Detail The gallery copiaThat whole cycle was shocking to me and really impressive. People live along the river and die in the river, and death is integrated into everyday life. To me that is really beautiful and peaceful and totally different from the way in which we hide from our sight everything related to death in Western society. And then we experience death around us in a very troubled way as opposed to understand it as a part of life. And I don’t mean to mystify the people in Varanasi and pretend that I know everything about how they experience their relationship to death from what I saw, but I did try to watch and listen, and pay attention to their ways and I think there is a lot to be learned from that. I think one of the most important things when we travel is to pay really close attention and not judge.

And in that same trip, after leaving Varanasi, I went to Nepal and decided to trek in the Annapurnas, so I spent 10 days walking from 700m high to 5416m, at the Thorong crossing point. That was an adventure, most of my clothes got stolen in a train in India while I was sleeping, so when I got to Pokhara I looked for someone that could rent me used clothes for the trekking, because it’s really cold up there. So there I went with some funny clothes that I got. I used to walk for about 7 hours every day and sleep in people’s houses. And that experience was really worth it, that relationship with nature and with people, so I always say that I gained a few drops of wisdom in that trip: respect yourself, respect the rest of the people around you, and respect nature. And that’s the closest you get to being truly alive.